On Wednesday morning I went to the London Buddhist Vihara, led by Venerable B. Seelawimala. When I first saw him, at the first moment, some tingling ran through me, he was so emanating! As we talked, I fund, that he is a very humble man, and experienced spiritual leader. When he laughed, le laughed with his whole body, when he talked, he was like the gentle waves of the sea; not in a hurry, not slow, just passing through the message from person to person. Maybe it is right to say, that their community in Europe is one of the firsts, with their history gong back to the ’20’s. 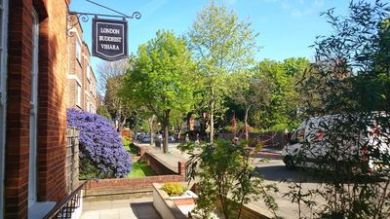 Then just arrived Robert Mac’Phail, an old friend to the Dharma Gate Buddhist Community, and a new one for me. He is a very direct person, talked to me about almost everything! Actually, we just have a common friend! He was very helpful about my journey too.

In the afternoon I went to the Kagyu Samye Dzong London’s centre where I met Lama Zangmo, the Leader of the centre. She, and her brother were very kind and friendly, helpful and open. They were eager to hear about why I went, and I was very honoured for I could share a cup of tea with them. They even helped me with the placing of the poster!

Sadly, when I met with the community of the Jamyang Buddhist Centre, they were on the middle of a retreat, which was longer, than my whole journey. Apart from that, I could speak to one of them, a girl, who was speaking fast, and a lot. She told me about them, and gave me some information, and when I left, she even made me a present, a little box of an apple and chocolate.

At last but not at least the community which had serious impact on me, was the Shambala at the London Shambala Centre. I met here Simon, a great man, with much deeper understanding of the dharma, which I have; but, I think it is true on all those, whom I talked about earlier. Simon was the only one at the centre when I got there. Unfortunatley I couldn’t go back at an other time, when more people would be there, but he was so generous with his behaviour, with his speak, with his knowledge, that it was definately worth it to go there, at least for me, personally. I believe that he will be passing through my message to those, whom it was meant to reach.

I had so many impressions about London, let me tell some about my experiences. I travelled probably more than twenty hours with the tube, helped a crying women to find back to his boyfriend, by carrying her luggage, laughed with the locals, meditated, slept on the airport, and even a guy wanted to date with me. I have to mention again, how kind and friendly are the locals were; meanwhile my long travels took place, I was engaging conversation with about ten different people, and all were kind, funny and interesting. I learned a lot, and I am most glad.

Tuesday I went to the Buddhist Society, which is one of the oldest Buddhist communities of London; it can be traced back to the ’50’s. Sadly, the leader, Louise wasn’t in the UK, but I met some wonderful guys there with lot of knowledge about Buddhism, and a lot of humour. They seemed really open and helpful as well, it was a fine time spent with them.

Later on I went to the West London Buddhist Centre, which can be associated with the London Buddhist Centre and the North London Buddhist Centres, which are all part of the Triratna Buddhist Order. There I met Bodhilila and Ratnaprabha, the leader of the community. He is a very extraordinary man. One minute he is talking about the two hundred years old Burmese Buddha statue of theirs, and showing me around, in the next, he walks with me on the streets, accompany me on my way to an other community, and when we stop, he sits down, dangling his feet like a child. I think it is very important for all of us, to keep our ability of being playful. He was gifted me with his precious thoughts, time, and a wonderful book, written by the earlier mentioned Maitreyabandhu.

Monday, after a long a tiresome journey I arrived to London. It was hard to find my way through the underground-dungeon, so I was sitting for about a half hour in the Sloane Square station, trying to figure it out! The people of London are just very friendly, I couldn’t even get lost. They always helped me through my trip. Almost all of them has a smartphone, with online navigator on it…

When I finally arrived to the London Buddhist Centre, it was a great relief. They were treated me like a long lost friend! Showed me my place for the night, offered me dinner, and asked about why I came. The were all very open about the EBTC, kind and helpful! 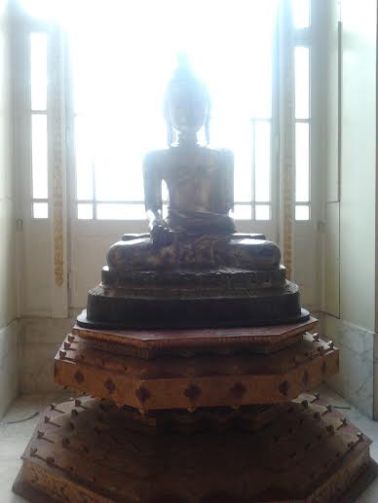 This is where I met Maitreyabandhu as well, who lives and teaches there. Like the others there, he is a very calm and kind person, it was an honour to meet him.

I’ve been so many places, met so many people, that I couldn’t write about all of them. Some of the communities, where I went wasn’t existed, some has been ceased already, in few cases, the people I met were narrow minded, so I will tell only about those, which had the most impression on me.

Bodhicharya is one of the most wonderful center in Berlin. It is hidden in the city, but immediately you can recognize it from the street. It gives the impression that you could found here a very interesting place. I love the way they painted the concrete wall on the street and also the firewalls around they center. 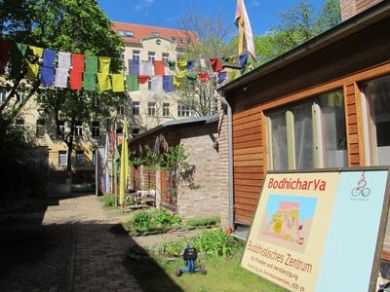 They are very busy now, because His Holines The 17th Karmapa Ogyen Trinley Dorje will visiting Germany (Kamalashila, Berlin), and they organize his teaching under the leadership of Ringu Tulku Rinpoche. Moreover they will build a new bigger gompa, and stupa also. 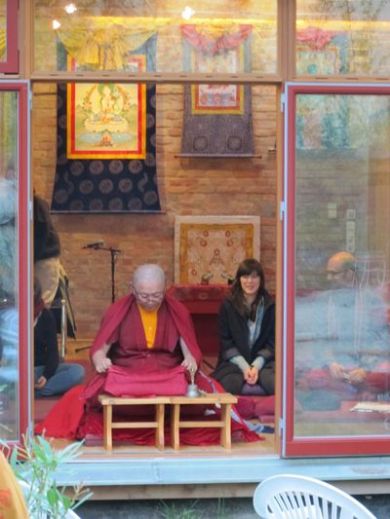 I had a wonderful afternoon in Bodhicharya Center. I feel myself very lucky because I got an appointment by Ringu Tulku Rinpoche also, and after I enjoyed the fire-puja ritual with the sangha. 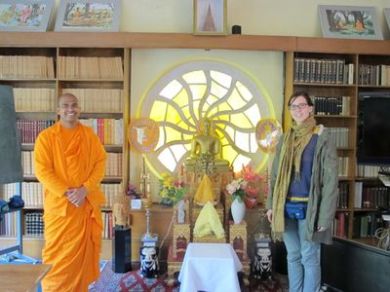 Yesterday, I have been in the very first buddhist center in Berlin with my berliner friend. The history of this Center started in 1924, and nowadays we can see it on the original state.

Here a Theravada Community works, two resident monks live here and few lay people from Sri Lanka, who are helping around the Center.

I met here with Venerable Santharakkhitha, who gave us a private dharma talk, and also told us how he see the buddhist life in Germany. Later he showed for us the Center, where also a great library takes place, they have a many old religious books on several languages. 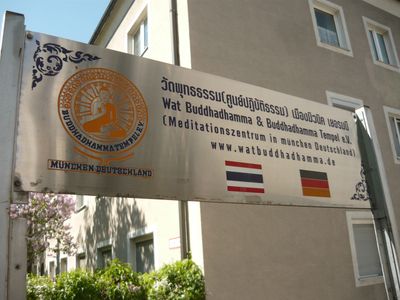 He met a member of German Buddhist Union who helped him a lot to connect other Buddhist communities in München.

Later they went back to Freising where they participated on a meditation. He met the president of local community Gunar, he brought breakfast for the monks. He received here a gift package of books, obviously they will be available in the DGBC library.
Geza is every time welcome back here! 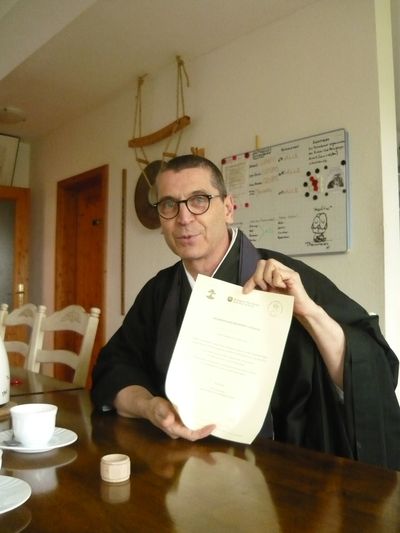 They went back to Austria, at Salzburg the Buddhistisches Zentrum was the target point. Geza met Kurt Gakuro Krammer here, who is the leader of a local community. 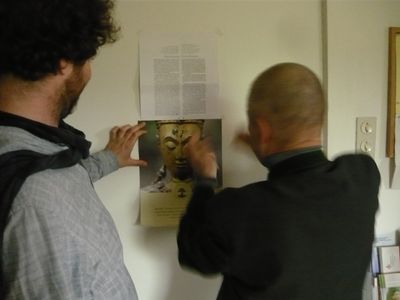 Yesterday i arrived to Berlin, it is a very open city. My first expression was quite positive, because a man who was standing on the subway near by me counted his mantras on his mala. 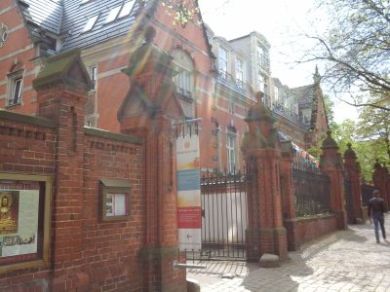 First I visited the Rigpa-Zentrum Berlin wich is established by Sögyal Rinpoche. They have a very nice Centrum, the building they got was officer’s casino before. When I entered I felt there a spirituality what they kept alive with the whole day practise. 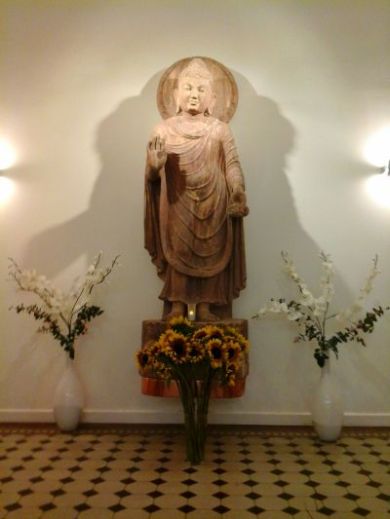 Here I met people from the board, they were very kind and they gave me a lot of good advices for my trip.

They get a honor that Rigpa-Zentrum will provide the accommodation for the 17th Karmapa Ogyen Trinley Dorje, therefore they are very busy now. 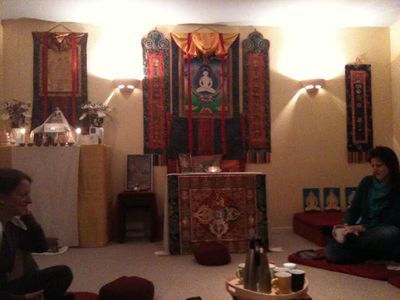 At night I practiced together with Ligmincha Berlin group, and I felt myself like at home.

Today we (Zsófi & me) have very joyful meeting with the president of the Austrian Buddhist Society, Gerhard Weissgraub.

In this center we feel ourselves faniliar, because many kind of buddhist community come together in one building. One dhamma hall is for theravada, the other is for zen and so on…

We talk about the situation of the buddhism in Austria with Mr. Weissgraub, and also about the European Buddhist Training Center (EBTC), the Dharma Gate Buddhist College (DGBC) and the intention to buddhism.

He attached by buddhism in Sri Lanka in 1979. We cannot write all the things what we talked, but he likes very much the EBTC. He had some questions and reflections, what we will talk with János Jelen, the rector of DGBC. Mr. Weissgraub will inform the members of the Austrian Buddhist Society from our acredited international MA program.

We will come back on Sunday as he adviced, then we can talk longer. Venerable Sukhacitto will be here in Dhammazentrum Nyanaponika also, who we know already from a retreat in Bajna and the Dharma Gate Buddhist College.

The journey on pictures 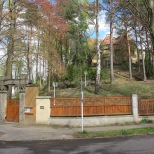 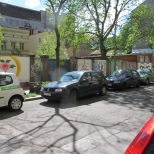 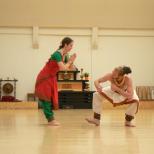 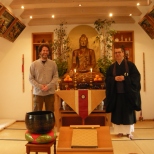 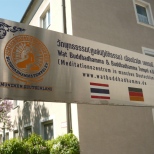 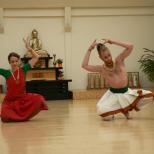 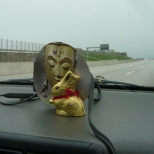 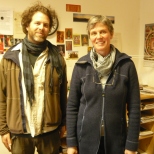 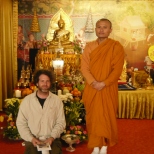 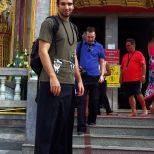 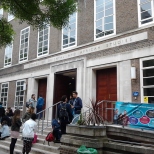 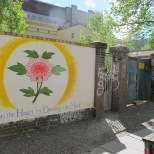 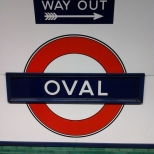 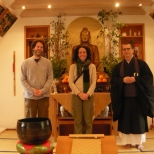 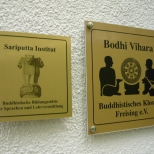 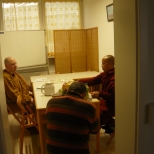 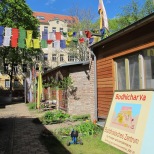 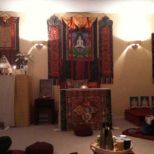 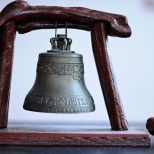 The Gate of the Dharma

The European Buddhist Training Center (EBTC) is a cooperative effort between the Dharma Gate Buddhist College (DGBC) of Hungary and Mahachulalongkornrajavidyalaya University (MCU) of Thailand. In September 2014, we are going to start a Master of Arts Program in Buddhist Studies, with an MCU accredited degree. The Dharma Gate ambassadors help us to spread the news in Europe that we have opened the gate of the Dharma wide, and we are awating students at the EBTC.